March 28, 2022 By latelier_anphu No CommentsPosted in Vietnam

The French are reputed to be one of the most inclined to settle outside the borders of their own country. And at l’Atelier An Phu, we can’t say otherwise!

Since 2010, we have seen hundreds and hundreds of French students of all ages pass through our walls, engaging in our activities, learning news languages, preparing for exams…

But what exactly is the French community in Vietnam like, and more broadly, in Asia? How many French people live in this corner of the world? What are the current trends of expatriation in Asia?

Today, we are going to learn more about French people living abroad!

Asia, one of the favorite destinations for French expatriates

According to Capital.fr and an ADP study, Asia is the 8th favorite destination for French expats. While the French generally prefer Europe and North America, and although Africa concentrates a larger share of the expatriate population (nearly double that of the Asian continent), Asia does indeed seem to arouse keen interest among the more adventurous.

If Asia, despite its size, only welcomes 15% of French people from abroad, it is less for a lack of interest from the French than for practical reasons. Indeed, compared to the destinations mentioned above, namely Europe, North America and Africa, Asia is in fact less easily accessible, for the following reasons:

Despite these difficulties, professional opportunities and the desire to discover other ways of life make the Asian continent a source of dreams and fascination.

Also of course, depending on the expatriate profile, the destinations in Asia change. If countries such as Cambodia, Thailand, Vietnam, and more generally, Southeast Asia will particularly attract retirees, the destinations of finance and globalized economy (Singapore, Hong Kong, Tokyo) will attract populations of young workers who are often highly qualified. India and China are naturally among the top 5 destinations in Asia, due to their demographic weights and sizes in the world.

But where in Asia will the French live? According to 2021 figures from consular registers, the most popular destinations are:

It should be noted that these Asian countries are part of the 11th Circumscription of the French abroad, a much larger constituency, spanning from Belarus to the Pacific Islands.

This number of 100,000 only concern individuals that took the initiative of registering their presence at their local embassy / consulate.

To put this into perspective, it should be considered that on January 1, 2022, the number of people registered in the Register of French people established outside France was 1,614,772, whereas the actual number was estimated at 2,500,000 expatriates.

In the light of this element, all other things being equal, more than 150,000 French people would then reside in Asia in 2022. Which, for example in Vietnam, would give a population of around 10,000 people. 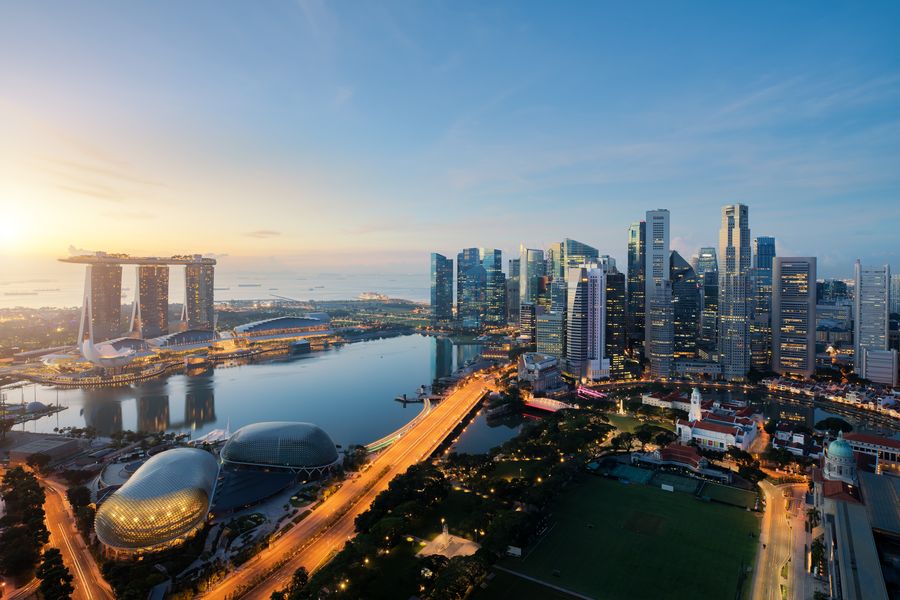 With nearly 13,000 French people for a territory of only 724 km², Singapore is the country with the highest concentration of French expatriates in Asia.

What are the current trends?

If you live in Asia (or even elsewhere), you surely came accross some news articles stating the departure of expatriates from their adopted country and return to France due to the global pandemic of Covid-19.

But in what proportions exactly were these departures made?

Between 2020 and 2021, the Asian countries that have experienced the greatest upheavals are:

All these countries have therefore experienced exit movements much higher than the global trend, since then again, worldwide, between 2020 and 2021, the number of expatriates had contracted by around 5%.

We can conclude that the health or social situations have on average deteriorated more in Asia than elsewhere during the Covid crisis: very harsh restrictions, delays in vaccination and scale of the epidemic therefore explain this strong downward trend.

However, this is not the case for all Asian countries.

Today, most countries on the planet (with the very notable exception of China), seem to have reached a situation where the authorities have decided to live with Covid, with proportions of vaccination of the population quite variable admittedly, but still in remarkable extents. Rare today are the countries which do not have 50 to 70% of their population vaccinated.

In 2022, Asian countries are reopening to tourism one after the other and reducing or even eliminating their entry conditions, a sign that things are returning to normal.

Asia remains more than ever one of the most attractive continents for expatriate workers, with very good economic conditions, growth prospects, and an often secure living environment. There is no doubt that soon, the trend will be reversed again, and that the French community in Asia and elsewhere will find a new lease of life!

Are you an expatriate in Vietnam and would you like to take support or language lessons for yourself or your children?

Contact l’Atelier An Phu in Saigon now and join us!